As one wizard’s career comes to a close, a star emerges from the rubble of Freo’s 2008 season.
Jeff Farmer was arguable the best small forward that Western Australia has ever produced.

Despite what ignorant people might say from the sidelines, Jeff Farmer was a team player to the very end. He was grateful to both his former clubs, Fremantle and Melbourne for the opportunity to play AFL. He played 249 games of football, at times sublime, at times wasteful, but never forgettable. From an entertainment point of view, Jeff never dissapointed.

His first game wearing a Fremantle jumper was a scratch match against Collingwood, and the excitement in the crowd at what was to come was palpable. It is fitting then that his final game was also against the Pies, in which he kicked 3 goals, two of them with a difficulty rating of 9, and passed off a few others. In total he kicked 483 goals, considerably more than any other Aboriginal player. Many respected commentators have questioned his omission from the Indigenous Team of the Century.

While many media types have sniped at Jeff behind the safety of a microphone, the true Fremantle fan knows Jeff as a team player, fiercely loyal, and always willing to sign a jumper or show a cheeky grin.

As Jeff retires, Frematle welcomes Rhy Palmer into illustrious company in winning the NAB AFL Rising Star. Palmer declared at the start of the year that he would have been to have just played 5 games. 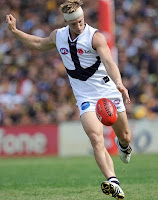 Palmer is the sort of player that supporters love to watch. His evasion skills are incredible, and his ability to win possession is incredibly valuable.
In other good news for long suffering Fremantle supporters, Garrick Ibbotson managed to come fifth in the prestigious award.

Published in The Roar

2 thoughts on “A tale of two stars”