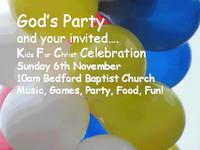 Well, its taken me about a week to formulate this in my mind,
but we have seen more first time conversions at Bedford Baptist in the last 12 months that in the whole first 10 years of my ministry.
We have also said some very sad goodbyes to some dear folk who have been at the church for a long time. If you are one of those folk, please don’t take offence at this, I have just been wondering aloud what is going on.

I do know this, the quality and creativity being displayed in our morning services and other ministries had gone through the roof. Thanks to the efforts of my Associate, the members of the Ministry Team and the freedom and empowerment being given to the Church by the Leadership team, things are humming along nicely. We reached in a significant way over 250 people at out Spring Fair. In a fortnights time we are having a party for our Sunday morning service. Now some may say every Sunday should be a party, but we are having balloons and streamers and hot dogs at this one! God’s Party

On November 20th we are having a Baptismal service with 3 wonderful people getting Baptised. I am so excited and joyful about what God is doing in this small part of His vineyard.

If you are part of our Church Community, jump on the Bedford Bus, its pulling out of the station!!

I’ve had a stack of people telling me they are reading my blog, thanks!
If you want to make a comment please do, you dont have to be a blogger, just click on the comments button, then choose other, type in your name, the verification code, and your away! 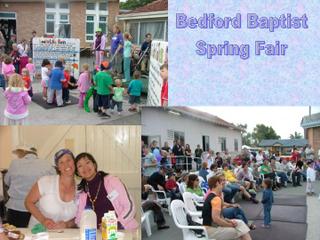 Full on weekend.
Both physically emotionally and spiritually drained, with lots to think about.
On Saturday Melinda and I were getting our house ready to sell, and madly getting ready for the Bedford Baptist Spring fair. What a huge success. Organisationally a massive amount of work, and kudos to the chief organiser, who is pictured on stage here.
Aproximately 250-300 people came around to buy an old toaster, purchase a coffee and cake for $2, have a back massage or watch their child pat a pig. This is a 2nd stage event for us. A way to connect even further those who have been attending our Toddler Jam program to the Church Community. We gave out about 100 show bags with lollies, colouring in and information about the Church Communities activities. An unqualified success.
Sunday morning at Church was good, we served up the left over sausage sizzle to the crowd, and they seemed to enjoy my message on telling the truth in love. We also heard about some inspiring Prison Ministry some people form our Church have been involved in and the kids were led in a song from the Congo, from a refugee who is fellowshipping with us.

Sunday night was awesome too. Church Together brought about 18 000 people together for a time of worship and inspiration. Wayne Cordeiro was a humorous and appropriate speaker for the event, especially for the pre-Christians. I might have preferred more of a challenge, but that probably says more about me, than what was appropriate. So well done to all those involved!

On reflection, the most purposeful and best thing I did all weekend was talking to a number of people at the Spring Fair. Intentionally seeking them out and trying to make friends. Being a Pastor is tricky, because many people see you as being representative of the church. You never leave the job. But I loved being there and seeing the community come together, at what was essentially a Church event. Awesome and what the church should be doing.

God sure is big in the good old USA. Some time ago there was a controversy over Starbucks putting new age and pro homosexual slogans on their coffee cups. Now Rick Warren (purpose driven life) has his mug on the mug (lets hope its been supersized!) along with one of his sayings. Now I am a RW devotee, his books are required reading as far as I am concerned. But this article I am giving you a link to talks about such things as John 3.16 being sewed onto garments, and bible verses printed on burger wrappers. in my view its great that RW has had such a influential impact on culture that his sayings can be put on the side of a coffee cup. But I struggle with ‘Jesus Junk” or the dumbing down of the Christian message. Mission is our priority, sharing the love of Christ, helping people discover abundant life. Is what some folk doing a good thing, or actually detrimental to the advancement of the Kingdom? Should the drive through attendant ask, “would you like a copy of the 4 spiritual laws with that bacon double cheeseburger?”

After sharing lunch with a few Pastors, who will remain nameless, I have come to the conclusion that Churches can be fairly brutal places. I hate to say it, but we Christians can be pretty awful to each other. Pastors can be awful to their church folk, and Church folk can treat their Pastor pretty shoddily as well. I know I am a Pastor, and therefore have my own perspective on this issue. This obviously colours my thinking. Let me also say that I thank God for my supportive and loving church. Its not always an easy job, and people in my Church are good to me. But my heart aches when I hear stories of how we let interpersonal conflict stall, delay or destroy what God wants to do through us.
What do non church people think when they stand back and watch us fight each other?

Seriously, God only gives most of us about 80 years. Dont waste it in trying to argue or fight your way through life. Instead pour that energy into mission, into reaching people who don’t know Jesus yet.

The following story is a sobering reminder of this.

“PORT CHARLOTTE, Fla. – A church pastor called deputies to remove 16 congregants who refused to stop singing as he tried to begin his sermon, according to a sheriff’s report.

Pastor David Noel reported a disturbance at the Bethanie Seventh-day Adventist Church to the Charlotte County Sheriff’s Office when the group would not allow the Saturday morning service to continue.

All 16 church members were issued trespass warnings and left the property without incident, according to a sheriff’s report.

One congregant who received a warning said the group was protesting Noel’s leadership and alleged misuse of insurance money for damage to the church caused by Hurricane Charley.

Another congregant, Edourd A. Pierrelus, alleged that Noel struck his chest and twisted his left earlobe during an Oct. 1 meeting to elect new church board members.

“Many things are wrong in the church,” Pierrelus told deputies Saturday. “We don’t want him to be the pastor.”

“I don’t have much to tell you, just that we are preaching the word here,” he said.

Robert said she and the other 15 congregants who received warnings will attend a different church service this Saturday.”

“May the God who gives endurance and encouragement give you a spirit of unity among yourselves as you follow Christ Jesus, 6so that with one heart and mouth you may glorify the God and Father of our Lord Jesus Christ.” Romans 15.4,5

You gotta love or hate him, but as an avid Eagles disliker, I like the guy.

I was trolling through some pages about Bedford for research purposes and I stumbled across this. It should cheer up all you suffering Eagles fans.
http://www.bedfordbc.com.au/miscellaneous/barry_hall.htm

Recently I was up in Cervantes on a blokes weekend away. A group of us from Church went up to a beach house for the Grand final weekend away. I was the only one in the group of 16 that was going for the Swans (I go for the Dockers and whoever is playing the weagles). The day only got better. While enjoying a meal in the Tavern at night who should be there in that isolated spot than Justin Longmuir and Troy Cook (Dockers players). I had the chance to talk to Justin about his match winning goal after the siren against St Kilda. If you watch the replay carefully, I am right next to him when he jumps into the crowd. As well I got Cook, surely a tough nut player if ever there was one, to sign a shirt for me, and I bought him and Justin a jug.

Ever had a brush with fame? Care to relate the story?