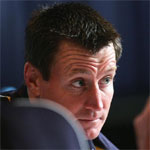 Did you catch Channel Nines news last night? Worsfold’s neck vein looked like it was about to pop out and strangle someone.

His comments were certainly innapropriate, but obviously not designed to be public. It is unfortunate that they were captured on film, but perhaps more unfortunate that he chose to say them. Another example of the scrutiny the West Coast are under at the moment.
I walk past a number of people with various disabilties, including Celebral Palsy, on my way to my seat at the footy. I am sure there are a number of folk with similar disabilities that are members and go to West Coast games as well. Poor choice of words John. STORY

It seems “The West Australians” love affair with everything Blue and Gold is well and truly over, as is the Eagles strangehold and control over the print media.
I do think the front page of The West is a little over the top, but you cant deny the facts either.
I almost feel sorry for them. But not enough to cheer them on tonight, GO SAINTS!