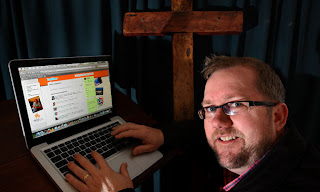 Inglewood pastor Mark Edwards said attendance at the Baptist Church had surged 30 per cent in the past year, largely because it had embraced technology.

Mr Edwards estimated 70 per cent of parishioners initially found out about the Church on the internet.

“I am amazed at how many churches don’t even have a website. People under the age of 30 don’t believe you exist unless you have a website,” he said.

He wanted to broadcast services online and was investigating whether Twitter or an iPhone application could allow parishioners to ask questions while he was talking on stage, making the service more interactive.

Establishing a “Google-friendly” website complete with videos had been vital in the five-year-old church expanding to 150 parishioners. He said it allowed people to learn about the church from the comfort and security of their homes.

“We also have people that work fly-in, fly-out in our congregation and it is handy for them to keep in touch with what is happening in the church, even when they are in Port Hedland or Karratha,” Mr Chant said.

“The gospel message is timeless but the methods are open for improvement and should be as modern as the world we live in.”

2 thoughts on “Just in case you missed it….”