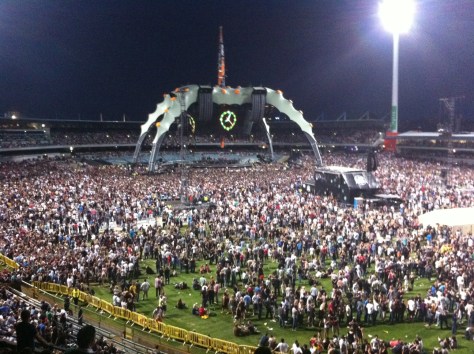 Having grown in my love and admiration of the Rock Band U2, their concert in Perth on a balmy Sunday night promised much, and delivered more.

As a Pastor and Christian I have grown to appreciate U2 beyond the obvious musical skill and entertainment factor, which they certainly have. The biggest rock band in the world putting on the biggest show in the world was enough to justify the ticket price, but they gave so much more.

The seminal moment for me occurred when Bono, who sung so much better than I thought he could, had the whole 60 thousand strong crowd singing along to “Amazing Grace”. As I filmed the moment on my Iphone and panned around I wondered how many people understood the song they were singing, and the fact it had real meaning and significance to U2 who have a full time Chaplain who travels with them, and has since the early days.

While Bono’s activism on human rights issues is well known, his deep Christian faith, while obvious to all who look, is not as well publicized.

The fact that Amazing Grace led into the most well received and possibly most significant song they sing, “Where the Streets Have no Name” was also wonderful. This song is about the Kingdom of God coming to earth, and heaven to come. It talks of a place and a time where there are no street signs to designate religion, race and creed. A time when, in the words of another of their songs, “all the colours bleed into one”.

Bono is not as universal as you might think. He talks a lot about grace. In my view, grace is the separating factor between Christianity and other religions.

As we head towards Christmas we think about grace, the grace of Jesus to come to a world which neither knew Him, nor what he stood for. Perhaps a little like many in the U2 Crowd.