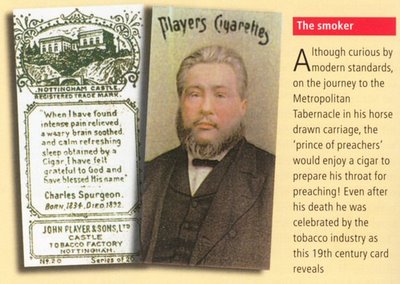 Spurgeon is known as the Prince of Preachers. Someone revered in Baptist circles for his ‘earthy’ and good humoured preaching. A man who inspired, and continues to inspire, many Christians and Pastors. He was England’s best-known preacher for most of the second half of the nineteenth century. Just four years after his conversion, Spurgeon, then only 20, became a pastor of a well known London Church. The congregation quickly outgrew their building, moved to Exeter Hall, then to Surrey Music Hall. In these venues Spurgeon frequently preached to audiences numbering more than 10,000—all in the days before electronic amplification. In 1861 the congregation moved permanently to the newly constructed Metropolitan Tabernacle.

However did you know that Mr. Spurgeon now and again enjoyed a cigar. In fact in reply to a man who could not believe a preacher would smoke, he said “I cultivate my flowers and burn my weeds.”

Here is another humorous story from his life.

“At the close of his useful sermon the minister introduced an American clergyman who, he said, was anxious to address a few words to the congregation. This reverend gentleman ‘improved the opportunity’ by inveighing fiercely against the sin of smoking tobacco, especially in the form of cigars, and told his hearers how he had struggled and fought against the pernicious habit, and how at last, by the blessing and with the assistance of Providence, he had conquered his addiction to the weed.”Then uprose Mr. Spurgeon and, with quiet humour, remarked that he would not allow the congregation to separate without telling them that he did not consider smoking to be a sin, and that, by the grace of God, he hoped to enjoy a good cigar before going to bed that night.”