You are frustrated, angry and dissapointed about something. Someone has a go at you, and you bite back. You let them know what they said was unnacceptable. You dont know them.

Hours later you hear they have died.

This is just what has happened to Dean Laidley, coach of the Kangaroos.
He had a verbal stoush with a fan as he was walking onto the field after the Roos suffered another defeat.
The slighty drunk fan, drinking from a can of beer, taunted Dean Laidley. 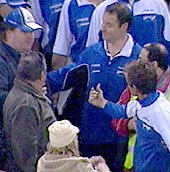 Then Laidley did something unusual for an AFL Coach and stopped and told the supporter he was welcome to follow him onto the oval to see for himself how disappointed the players were. Apparently the fan had been mouthing off all day, and said something like, “there’s our season gone”.
Asked why he reacted, Laidley said, “I just thought, I’m sure at that point all the supporters share the disappointment, and I just wanted to bring him down and say, ‘Look, we’re hurting as much as you guys’.”

The guy was hit by a train later on that day, so it may have been related to what Dean said, it may not have.
Either way it is a real indication that as leaders we need to be really careful what we say, even if what we are saying is correct. Sometimes responsibility can bite us really badly.
Will be interesting to see how the club handles it from here on in.

2 thoughts on “Imagine this”