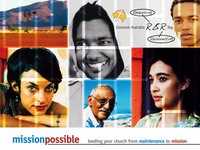 Went to a thoughtprovoking and inspiring mini conference today with Scott Pilgrim from Crossover Aust. and Kevin Keegan from Dural Baptist Church in Sydney. They spoke of the challenges facing Pastors trying to move congregations from maitenance mode to mission mode.
Scott also entered into the ‘attractional vs incarnational’ debate. What he had to say was informed and interesting. Scott stated this, “Missional churches are incarnational by nature… and yet authentically attractional in building faith community.” In other words it is not one or the other, but both. As I interact with some from the emerging church context, it seems to me that really we are talking about what we are doing, rather than why. And this to me seems to be a question of balance. I like what Scott was saying, we need to be incarnational, and our programs and services need to be attractive.