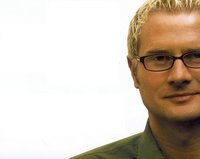 Here is some grabs from an interview with Rob Bell, the author of “The Velvet Elvis” and producer of the NOOMA videos. That reminds me, there is a new one out, I must grab it!

“He’s fond of punk music, he surfs and has a trampoline in his yard, but he also knows Hebrew and Greek and can preach the gospel astutely, and, apparently, with great appeal.
So much so that Mars Hill, the congregation Bell co-founded with a small group of friends seven years ago, is one of the fastest growing churches in U.S. history, drawing more than 10,000 worshippers each week (plus another 30,000 or so who download MP3s of the weekly services from the church Web site.) “

“The Emergent (or Emerging) church is a largely youth-oriented movement within evangelical Christianity that has appeared over the past 20 years and is characterized by its attempts to deconstruct — and then reconstruct — what it means to be a Christian today. Bell bristles at the Emergent label, insisting it’s one he’s never applied to himself or Mars Hill”

I love Rob Bell’s stuff. He is seriously the best preacher I have ever heard, for this generation. His message of grace, true spiritual freedom is awesome. Rob Bell inspires me to plunge deep into the stories of the Bible every time I hear him speak.
LINK

One thought on “Rob Bell, the next Billy?”