At almost the last minute I found myself on a plane bound for MMC Tassie. I was asked to speak at the Friday night session. No pressure said ‘Howie’, but we expect a lot of people there Friday night and we want them to come back on the Saturday!

Unfortunately, in one sense, God dropped a message in my lap which I thought was a strange one to give at a Mens conference. From Numbers 16 where Korah and his cronies confront Moses and Aaron over their leadership. It is a tough passage in many ways. God is in His ‘consuming fire’ mode which we read about in the Old Testament. People are killed, and Moses and Aaron have to ‘stand in the gap’ for them. This despite the fact these people are plotting against him and Aaron.

It went well, a number of blokes came forward for prayer and I had serious conversations with blokes all weekend following on from the message. God moved and I believe honoured the obedience I shakily showed.

But I got so much more from the conference than what I gave. In fact of all the Mighty Mens Conferences, this was right up there. The other one which was significant was 2009 where about 2500 men sung like they meant it (here).

Steve Brown, a pastor from

Torquay…pray for him and his band of brothers. They will do significant things in their city. Steve preached a passionate and life changing message on Saturday morning.

Brad Patterson from Mukinbudin Church of Christ, a passionate preacher and a bloke with a soft heart for God and others. He preached a great message at the Saturday arvo session and then a message at the Door of Hope Service on the Sunday morning.

Pastor Steve Fitzallen. The Pastor at Door of Hope in Launceston. Steve is a great

bloke, and opened up his church for us to use. That was a risk! Having a group come in who he did not really know well. To his credit he opened his heart, and the ministry which took place in his church was telling. We had a great time on Sunday morning when I saw Steve’s heart for his own people, and for the city. 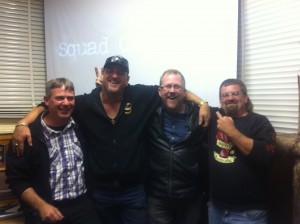 They head up the God Squad in Launceston and the Church associated with that. The only church I have ever preached at with a full bar in the back. (not open on Sundays). They took me to some bikie clubs whose names I can’t mention. Blokes in there were ‘real’ blokes and friendly enough, but troubled souls. In need of the transformation of Jesus. If anyone can reach them, these blokes can, taking Jesus with them into what the devil claims is his territory.

These two blokes are carrying a lot of responsibility with the Mighty Mens Conference in Tassie, but did an excellent job or organising it. I believe I have made mates to partner with in ministry in the future, hopefully around not just Tassie and Perth, but all over Australia. Not the sort of blokes that look like they would fit into many churches, but the sort of blokes Jesus asked to follow him.