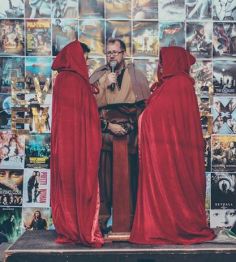 A number of people have seen me dressed up looking slightly ridiculous as Obi Wan Kenobi performing a wedding. While there have been some unkind remarks suggesting I may be more the old Alec Guiness character than the hipster Ewen McGregor model, overall reaction has been quizzical. Why on earth would a Baptist Pastor perform a wedding dressed in brown robes with matching blue Light Saber?
It is pretty simple really. It was a choice between a Star Wars character or Spiderman, and I don’t look good in tights!
At our church we run a Young Adult service with the mission of reaching students at ECU Mnt Lawley. We have had some success, and built some healthy relationships. Pastor Josh and his wife Marnel regularly host a bible study group. One of the attendees is a young man from Japan, Hiro. He has fallen in love with a student from China, Evony, and they love comics. In fact they are self confessed ‘nerds’. The idea of being married dressed in traditional wedding attire was never going to work for them. So they rather naively asked me if I could marry them, and could we all dress up.
Seeing around 100 students from ECU Mnt Lawley and WAAPA crammed into our half renovated children’s area for a comic-con wedding was on one hand spectacular, and on the other hilarious.
As Pastor Josh and I chatted after we reflected on what an amazing missional opportunity we had just had. Most of the students have never been in a church before, and found it hard to comprehend exactly what we were doing there. But they respectfully listened as I shared the scriptures and prayed for their friends.
I don’t know if dressing as Obi Wan Kenobi was what the Apostle Paul had in mind when he wrote, ‘be all things to all people’ but I am assuming he would approve

One thought on “Why I did a Star Wars Wedding”