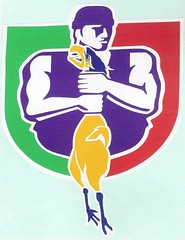 Rodney Eade has come out and said something a lot of footy lovers have known for ages,
the West Coast Eagles have no soul.

They are a corporate identity, franchised and packaged for maximum consumption.
At the derby I was bewildered by the karaoke Eagles theme song at the start. Don’t the fans know the words?
The Dockers song may be accused of being inane, like a dirge, but its fans know the words, and sing them with gusto. Your typical Dockers supporter does not need to be told how to support their team, they just do!

Then the Eagles are given this chant at quarter time over the loudspeaker, “Go Eagles go, SGIO, go Eagle go, SGIO”. Does anyone else not see the problem with this?

The final nail in their coffin is this one.

a. Support the Dockers at all especially with our lack of success. You dont support a team because they are succesful. There is something about them that just grabs you. Ask Gareth why he supports St Kilda? Or a Richmond supporter why they support that basket case of a team. They cant tell you why, they just do. And it burns within them.

b. Don’t support the Eagles as well
A common line heard is this, “I support both WA teams”. What a joke. What a passionless statement. Imagine if a Victorian supporter of Carlton said, “because Carlton are out of the finals, I will support Collingwood, after all we are both Victorian teams”. Give me a break. Passionate supporters support their own team, and thats it.

Dockers supporters can’t stand the Eagles, its as simple as this. I much prefer a discussion with a passionate Eagles supporter who can’t stand the Dockers, than one whohalf likes them. We understand each other, its nothing personal, we just can’t stand your team. Its much easier to deal with.