A great evangelist has passed away. Billy Graham was an innovator. A clear speaking Gospel message interlaced with humour, emotion and story. So many people I know can trace their spiritual lineage to a Billy Graham Crusade.

He used modern music to the mission he was involved in. From Johnny Cash to the Gaither Music crew.

At his funeral of the songs he picked was written by Paul Baloche in 1999. Billy would have been 80 years old when he heard this song…at the earliest. Years later he had Michael W Smith perform it at his evangelism rallies.

It goes nicely with this little newspaper response that has been floating around for a while. 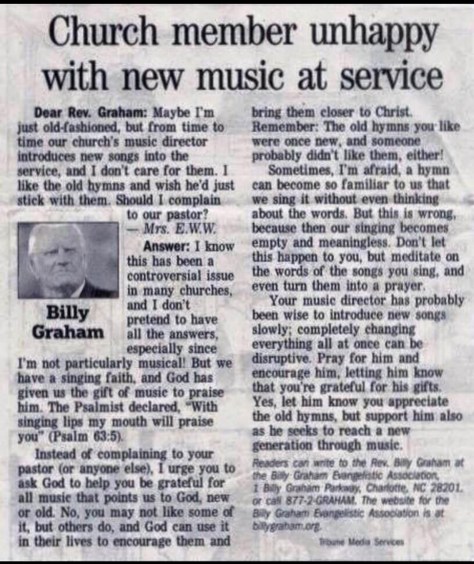 I most love what Billy says here… ‘Sometimes Im afraid, a hymn can become so familiar to us that we sing it without thinking about the words’. In my words, sentiment should never replace spirituality. Worship has never been about us, its about God. Its about us being challenged to deeper spirituality, deeper connection. Its not about what we are familiar with.

So often we go back to the songs and the music that were present in our own spiritual formation. But God has moved on. What He was doing then was good. What He is doing today is better. Billy knew this.

I am going to listen to something new today. I hope to be like Billy when I am 80 years old.