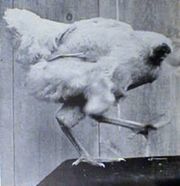 Oh dear, must be something in the water.
Have you heard the true story about the headless chook who kept living for 18 months after having his head cut off?
“On Monday September 10, 1945, farmer Lloyd Olsen of Fruita, Colorado, had his mother-in-law around for supper and was sent out to the yard by his wife to bring back a chicken. Olsen failed to completely decapitate the five-and-a-half month old bird named Mike, leaving one ear and most of the brain stem intact.
Not quite sure what to do with his by now loose head, on the first night after the decapitation Mike slept with it under his wing; it was this touching tenacity to life and the now redundant organ that convinced Olsen to reprieve Mike from the cooking pot.
Despite Olsen’s botched handiwork, the by-now-headless Mike was still able to balance on a perch and walk clumsily; he even attempted to preen and crow, apparently not noticing that neither activity could be accomplished properly without a head. After the bird did not die, a surprised and no doubt guilty Mr. Olsen decided to continue to care permanently for Mike, feeding him a mixture of milk and water via an eyedropper; he was also fed small grains of corn. The unfortunate Mike occasionally choked on his own mucus, which the Olson family would clear using a syringe.
When used to his new and unusual center of mass Mike could easily get himself to the highest perches without falling. His crowing, though, was less impressive and consisted of a gurgling sound made in his throat, leaving him unable to crow at dawn.
Being headless did not stop Mike putting on weight; at the time of his beheading he weighed some 2½ pounds and at the time of his death, this had increased to nearly 8.
Story
I’ve got to be able to use this as a sermon illustration somehow??? 🙂

One thought on “Running around like a headless chook”