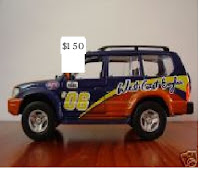 It couldn’t happen to a nicer bunch of blokes.
Following a complaint to parking inspectors from the Department of Sport and Recreation, West Coast players and coaches returned to their cars at Leederville to find they had been issued $150 fines.
An inspector issuing the tickets said he had responded to a complaint because their parking bays had been filled with the flash cars of West Coast players.
Among the many unhappy faces who received fines were Eagles vice-captain Andrew Embley, Daniel Kerr, Tyson Stenglein and assistant coach Darren Harris. Stenglein was miffed to find two tickets on his Holden ute, the second posted by teammate Kerr, who obviously did not think much of his.
Story