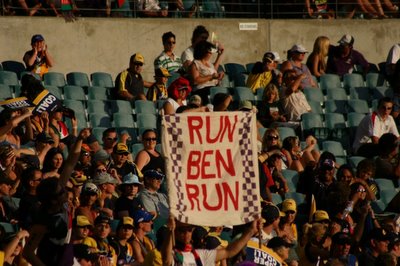 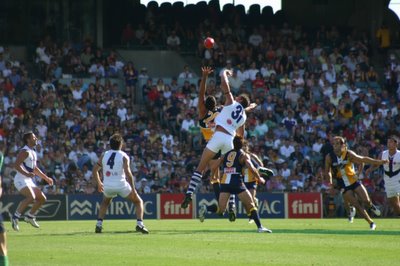 Apparently there was a football game on tonight, and apparently the Dockers thrashed, hammered, defeated, carved up the under seige Weagles. So sad, too bad!!

I told you I would gloat if we won, I’m gloating. Sandilands thrashed “the best ruckman in the competition”. He didn’t just beat him, Sandy pantsed him fair and square. And dont give me that old chestnut about the weagles fielding a sub standard side. The Dockers had Pavlich, Haddril, Black and Polak out. The West Toast had their best midfield on the park, and they lost convincingly. Cant wait to see the replay. Interestingly enough it appeared the WC got most of their goals from free kicks awarded by the Green M & M men.

“A six-goal haul from Luke McPharlin has inspired Fremantle to a comfortable 62-point victory over the West Coast Eagles in a fiery NAB Cup clash at Subiaco Oval on Sunday.The Dockers secured the 1.18.10 (127) to 1.7.14 (65) victory early in the third quarter, four straight goals to begin the term leaving the Eagles defence in tatters.Fremantle’s forward line of McPharlin, Jeff Farmer, Justin Longmuir and Paul Medhurst was superb, combining for 13 goals and receiving great delivery from a hard-running midfield.At the other end, the Eagles attack cohesion, Brent Staker and Ashley Hansen struggling to find space with Andrew McDougall not touching the ball in the first half.”