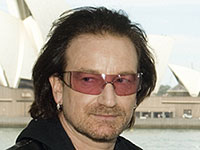 Thanks to Rodney for providing this link.
Here is the transcript from Denton’s interview with Bono. The interview as certainly captivating. Yet I suppose with my bias I would have liked to hear some more questions on Bono’s faith explored. There were some challenges there from him as well.

“BONO: It’s not that. But I do think yeah, it’s being away from me to explain myself to the conservative right, because I just won’t let them away with it. The religiosity of the United States is hugely questioned by Europe – and for good reasons. Europeans know that they pay more per person to what the Americans refer to as “the least of these”, the poorest of the poor. So you can’t get away with this Baroque sort of biblical language and not follow through on it. I just won’t let them follow through on it. I explain AIDS to these very intense religious people as the leprosy of our age. I challenge them on their faith. I didn’t really have to go that route with Bush, although I did talk in and around that.”

“ANDREW DENTON: You fulfil a Christian ideal.
BONO: No, I don’t think so. All the commandments I’ve broken and the ones I haven’t I’ve probably wanted to. But that said, I do have a faith and it is challenged on a daily basis by what I see in Africa. Yes, and yet more than that I have a sense that really people are the problem. We’re the problem, really. God gets a lot of bad press. The tsunami was very eloquent in a way, the response. There’s a natural disaster, this awful misnomer, Mother Nature, it’s just dreadful. But in Africa you have an avoidable catastrophe of tsunami proportions every week. So we have the technology, we have the resources, we have the resources if we have the will.So I’ve gone through my shouting at God, I’ve gone through my angry phase but I finally end up looking at my own indolence and fighting with it, an indifference. Because I have it, too. And I feel that I’m not alone in this. I feel there’s a generation of people. I kind of realised this isn’t something we can really blame God for. This is about us, really. So that’s where I am on it.”

Theres a few sermons in there to preach!