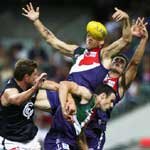 In case you didn’t realise it, the Dockers won on Saturday night.
It was my son’s first time at watching a real AFL game.
I have taken him to pre season and practice match games before, but this was the first time he has gone.

He got a Johnny Docker pack, which had a radio/torch, pack of cards, autograph book, pen, stickers and Docker Bag. Really good actually, expecially considering he also has season tickets.

It case you didn’t realise, the Dockers beat Calton. Listening to George Grizzleguts today, and some other commentators, you would have thought we lost!

The first half showed what Freo are capable of. If we get it together for four quarters, watch out!

As we were setting up yesterday for the concert I was half listening to the Eagles game against the Crows. They did very well to get up and win……………….unfortunately!!!!!!

2 thoughts on “Dockers win a game”