Here is an account of one the day trips I took when on holidays at Bremer Bay, Fitzgerald National Park, and when we visited Point Anne.
We headed off from Bremer Bay, across the sand spit at the town beach. Up the gravel bush track and into Fitzgerald National Park.
As we started our our day trip we experienced some of the biggest corrugations I have ever had the mispleasure of jolting on my behind. In between making jokes on our little UHF radios about high beam and Forestor headlights, we argued about the best method of smoothing the ride out. Ultimately the ‘go as quick as you safely can’ argument won.

In the group was a Forrestor, a new Landcruiser, a Pajero, a Wrangler and my 2006 Suzuki Grand Vitara V6 Manual.

After about 10 ks of gravel track, some of it washed out with slow going required, we hit the sandy track which would take us to the beach. Even in the middle of the pack, I could hear the new Cruiser being scraped by the overhanging vegetation. It buffed out fine but can be a little disconcerting at first.  I asked my wife to ‘pull in’ her side mirror, and I pulled in mine, and the Suzuki’s narrower body was fine.

Having radios was really helpful as we snaked our way down various tracks to eventually hit some soft stuff on our way out of the bush and onto a reasonable sized salt lake which led down to the beach. The momentary freedom caused me to give the V6 motor a bit of a squirt as we all darted down to the waterfront.
None of us had our tyres down at this stage yet we all managed to get down to the ocean without a hitch. 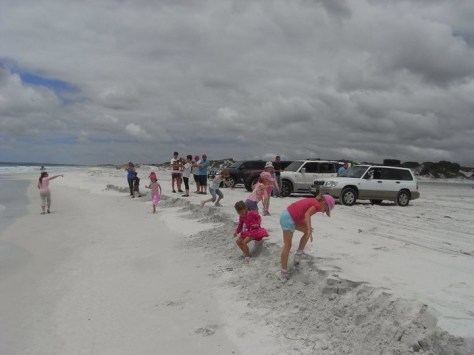 A helpful ranger with what is arguabley the best job in the world popped past on his 4 wheel motorbike and told us about the beach trip to Point Anne. ‘Drive about 10 kilometers along the beach until you get to this little cliff where there is some rubber matting to help you up. There is a bit of a dip but you should be fine”.

Against the plaintive pleas of protest from our collective group of wives we let our tyres down and begin the journey along the beach. I suggested the Cruiser go first and plow a trail for us. The Pajero followed him, I came up third and the Wrangler and the Forester brought up the rear.

It was pretty easy going for about the first five kilometres until we hit a soft patch near the sea and needed to go up the bank a bit. Even the Cruiser started to struggle so all of us stopped, and let the tyres down to various limits. I let mine down to about 18psi. 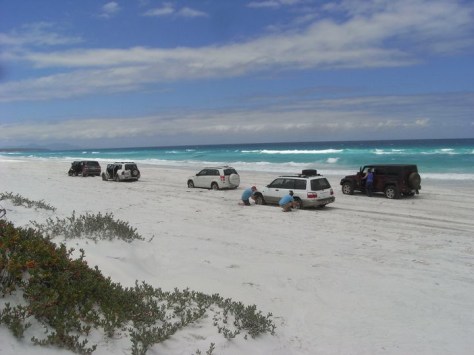 It was interesting following the bigger vehicles. I needed to go a little faster than them to be comfortable, and if I could have, I think it would have been better. While I went along alternating between first and second in my manual V6, they mostly plodded along in their automatic vehicles. A couple of times when I managed to stay in second for a while, the GV was moving beautifully. I needed to keep momentum up and it glided over the sand, rather than ploughing through it as the Cruiser did.

We made it to the ‘cliff’ and all of us gulped a little. The most experienced of our crew was the Forestor driver so I suggested he go first, mostly because he had the vehicle with the least clearance. If anyone would get stuck, it might have been him. It looked a lot worse than it was. Although it appeared he bottomed out a little in the first 3 metres of sand and dip, he made it to the rubber matting with no problem. I went next, and despite having a sore arm from where my wife pinched me, the Grand Vitara went up the slope easily. Compared to my old 1.6 Litre Auto Vitara, this one has oodles of power. 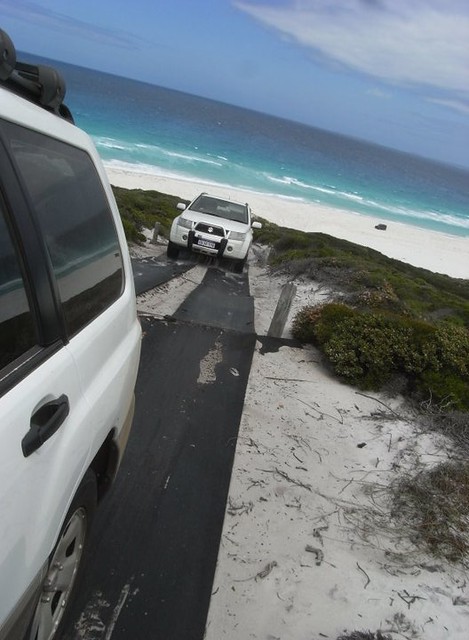 Once we all made it to Point Anne along the corrugated gravel track, the views were simply breathtaking. What a beautiful part of the world with stunning scenery and magnificent cliff and rocky structures jutting out into a wide expanse of creation. 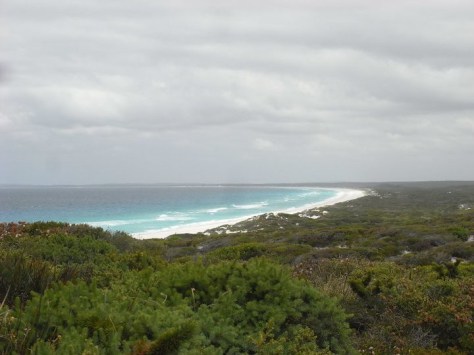 2 thoughts on “Bremer Bay, Point Anne and the boys in their toys”