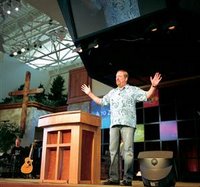 This is a great story

Rick Warren is listed among some other Americans as people who give back.
Since 2002 when Rick had something of an epiphany he really has been instrumental in seeing thousands of people helped.
He cops more than his fair share of criticism, but what are we doing about injustice and the poor in the world?

Bono said once that governments were scared of churches because if they ever realised their combined clout, they could do and change anything. Rick is mobilising churches worldwide in incredible ways.
“Mobilizing Christians worldwide to heal the sick and feed the hungry It starts as an ordinary success story”

“Now things get exciting. Another pastor might be content to diversify into “PDL” DVDs and gift books, but Warren is more ambitious. If “2.3 billion people in the world claim to be followers of Jesus,” then why not take the next step and mobilize those people to do important things, like stop poverty, improve literacy, feed the hungry, heal the sick? Conventional relief organizations are fine, but why not tap what Warren calls “the faith sector,” the armies of motivated religious volunteers who are sick and tired of polarizing rhetoric and professional crusaders?