The past weekend I spent in the dustbowl of a paddock in Cuballing, Wheatbelt territory of Western Australia. I helped organise the Mighty Mens Conference. Around 380 blokes from all over Australia turned up.

My role was publicity, audio-visual, some work with registrations and general leadership.

What a great weekend. The key leader of the event really felt God was wanting to deal with a ‘religious spirit’ which has infected our Churches. The idea that Christianity is organised…or sterilised…leaving out the need for or reliance on the Spirit of God to renew and change us. 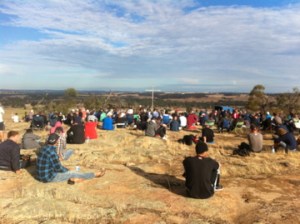 Each speaker brought something fresh and challenging. Real blokes…each one…with real stories of God’s intervention in their lives, enabling them to be sensitive husbands, ‘present’ fathers and strong leaders in the home, church and society.

For many of the men the highlight was the ‘down times’ when instead of talking about footy, cars and work….we spent time praying for, counseling, encouraging and speaking prophetic words into men’s lives. This is not to say we did not have time speaking about cars, kicking footies and even having rides in a helicopter! But just that as well as the normal blokey stuff, we found ourselves engaging with other men on a spiritual level, something which is rare in churches.

I wonder what will happen as the blokes go back to their own churches? Will they continue to pray, encourage and exhort each other? I truly believe…and hope so.

On a purely personal note, having my own son with me was a joy. We camped, 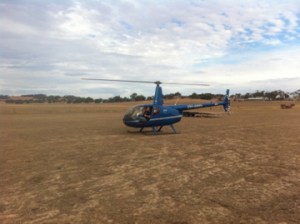 ate bad food (sorry mum) and worked on the AV stuff together, with Mr 11 operating a video camera for much of the weekend. He also got to have a ride in a helicopter…and on Sunday afternoon when most blokes had left, drive dad’s Zook (manual gearbox and all) around the paddock.