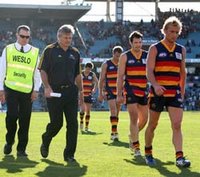 What a win!
Hard, pressured, mature footy from a team who obviously had not read the script.
Ladder leader, at home, McLeod back in, 50 000 rabid Croweaters cheering on, dubious home town umpiring……….

Farmer, what defensive pressure. Who has taught him to play the team game? Yes, he kicked a lazy 70 when he played for Melbourne, but he mostly cared about himself back then. Now he cares about the team…..

Matthew Carr…….. did team playmaker Simon Goodwin play?? Because I didn’t see him under the BLANKET that Josh’s brother was carrying around.

Great to see J LO back out there as well.

Despite there often being 3, yes 3, defenders hanging off Pavlich, he still managed to cause plenty of headaches for the Crows, even when he went into the midfield.

My prediction for next week? Well, myriad is going to be a very sad sad place to be on Sunday night. Maybe Saint Gaz could do a series on Jeremiah, the weeping prophet… 🙂

p.s. this late news in from the Herald Sun
“Centrebet now has Fremantle at $15 for the flag and spokesman Gerard Daffy noted there is a chance it could get two home finals if results fall its way.
“We expect them to win their last three games and that includes beating the Eagles at Subiaco,” Daffy said.
“That would mean they are every chance to finish either third or fourth, meaning they could easily meet the Eagles at Subiaco (in the first week of the finals), which is obviously their home ground.
“They’ve already beaten the Eagles this year and if they beat them in their first final then they would go straight to a preliminary home final. Suddenly it is looking very good for a team that most had written off just over a month ago.
“They have been backed solidly all season and are a loser for us and were a loser on the weekend.
“One punter had $4000 on them at $2.50 at quarter-time (yesterday) and another had $10,000 at $1.55 at halftime. They were actually back out to $2.50 at three-quarter time when Adelaide came back.
“They were a loser for us in the game, being backed from $3.65 into $2.90.”