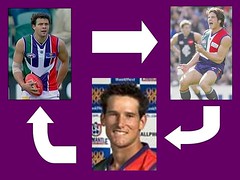 Selection dilema of the best kind
Originally uploaded by dockermark35.

With Chris Connolly declaring Antoni Grover and Luke Mc Pharlin almost certain starters for next weeks Preliminary Final against Sydney, the question is, which unlucky defender will be dropped.

After one of the most even team contributions all year against Melbourne, it will not be an easy task.

Shane Parker is in career best form. Luke Mc Pharlin offers too much flexibility and skill. Roger Hayden’s dynamic form reversal has been one of the key reasons for the Dockers turn around mid season.

The only likely exclusion might be ‘Mr Fix it’ Luke Webster. This despite a 14 possession game against Melbourne and kicking the first Fremantle goal.

One interesting statistic that might make it even more difficult for the match committee is the fact that since Webster was included in the side, in round ten, his first game for 2006, Fremantle have only lost one game, and Webster did not play in that game. In fact Webster has not played in a losing Fremantle side this year. This is a similar state of affairs to Clem Michael many years ago, when he too was a tall running player who also seemed to be a team barometer of success.

Grover’s value to the team, especially in facing the strong Barry Hall, is unquestioned. But the quandary of who will miss out may not be answered till 20 minutes before bounce down on Friday night.

In a late postscript, Paul Medhurst may also push for a shock inclusion after almost singlehandedly giving Claremont victory over South Fremantle. Paul kicked five goals and impressed with his endevour and team work in a losing side as the Tigers bowed out of the finals race this afternoon.

3 thoughts on “Selection dilema of the best kind”