I have had my Zook for over ten years now and its safe to say with the numerous dings and scratches from 4wd adventures it is no longer shiny like it once was.

However in one regard at least it is better. After getting back from some 4wd adventures down South of WA I decided to finally find out what was wrong with two of the three 12 volt outlets on the vehicle. The passenger ‘cigarette lighter’ was not working and the rear one had never worked. That was a pain because the Engel fridge is normally in the boot.

I had also installed a secondary 12v outlet with twin outlets for rear seated passengers to charge their phones or whatever. That also had stopped working.

I took apart the whole assembly surrounding the gear lever and discovered the wiring I had used was past its used by date so I rewired the secondary outlet. A couple of fuses were gone so I replaced those. That was harder than it sounds because the GV has micro blade fuses and they are difficult to replace, even with a fuse puller. A small screwdriver was actually far more helpful.

Then to the boot outlet which has never worked. Imagine my surprise when I dissambled the surround and discovered the wiring was not even connected. I reconnected it, checking first that the wires had power, and I found out the 12v outlet was unstable anyway. So I replaced that with a good marine grade outlet. Then I fitted a fuse tap in the front fuse box so I could run the rear socket with its own circuit. Standard it runs on the same circuit as the passenger 12v outlet. Thats not a great idea when running a fridge as well as 2 or 3 iPhone chargers through it.

The satisfaction of seeing the blue light come on with my tester was immense. Having owned the car for ten years, I finally have fixed that minor annoyance. 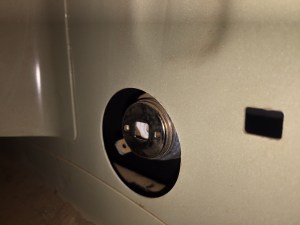 The outlet from the rear with no wires going into it.