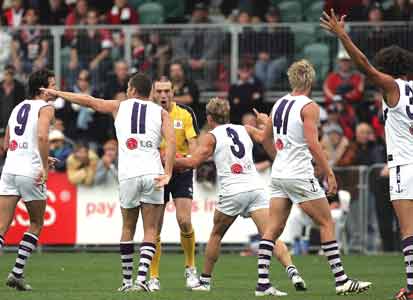 Okay all, I have calmed down. You are not meant to get angry about a stupid game of football, its just a game.

The miners getting found alive is a far more important story to come out of Tasmania from today.

Yet I suppose what most angers me is the injustice of it all. This was not a bad free kick decision like last year, which cost us this game. This was a considered decision, when the umpire was presented the facts from the boundary and emergency umpires, the game has finished, yet in a fit of what can only be described as temporary madness made a calculated decision which was not only wrong, but could cost my team a spot in the finals.

The Derby is next week, with Mc Manus out with a hammy, Hasleby sore still and Farmer possibly under report, we need those four points.

It is time for some honest, openness and ACCOUNTABILITY to be displayed by the politically correct weak as water AFL and umpires. Admit your wrong, do the right thing, and lets all move on.