I bought this car about six or seven years ago.
The owner shafted me big time. He had driven it hard and cooked the motor. They do run a little hot the Vitaras, especially with their small 1.6l motor needing to work pretty hard.
I did not check it out enough, some of the hoses had obviously been cooked, and after three months I discovered the head was gone.
The mechanic gave me the bad news.
We replaced the motor with one out of a Baleano (exactly the same motor) which had done about 30 thou. I saw the car, it was wrecked, and saw the speedo.
Since then I replaced the radiator and a couple of other parts such as alternator and starter motor, and have had years of relative free and happy motoring.

We have taken the Suzuki many places, Cervantes, Jurien Bay, Bremer Bay, Denmark, Albany….Wherever I could find a beach to drive on, I did. The tyres were over oversize, especially for such a light car. This meant that I replaced the front ones, and they hardly look worn after more than 30 thousand K’s. 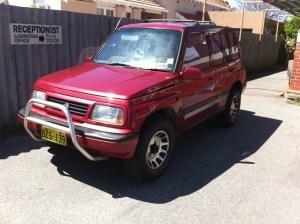 . It was the first car we bought after Clem was born, he was about 3. Ruby came shortly after. They have really only known me driving that car, its dads car. Clem put a dent on the roof when he was four, climbing over it, Ruby and I sang along to songs while we were driving along….and as a family we used it to tow our little trailer down to Bremer Bay…But it’s gone now, sold to a man with his own daughter, for far less than I paid for it. Time to buy something else. 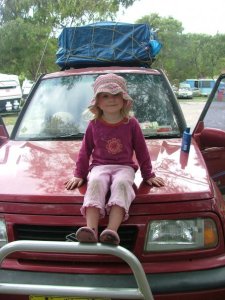