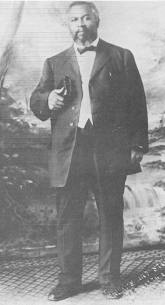 William Seymour is known as the founder of the modern Pentecostal movement. As part of our continuing series on ‘Heroes of the Faith” I spoke on his life on Sunday.

Along with his work in bringing the work of the Holy Spirit to the Church’s attention, he also made a significant contribution to the breakdown of racial segregation. This is what I shared on Sunday….

So what do we learn from William Seymour that is important to us.
Firstly and really obviously, so obvious that it almost pains me to have to say it.
Colour, race,cultural and religious backgound means nothing to God. To distinguish on that basis is like saying to a father, which one of your children is less worthy to be your child, is your son less worthy because he is male, is your daughter less worthy to be called your child because she has red hair?
I mean how patently ridiculous and wrong it was for Christians to discriminate the grace the message the good news of Jesus, based on appearance, background.

This is what someone said of the revival that took place under Williams ministry…
African-Americans, Latinos, whites, and others prayed and sang together, creating a dimension of spiritual unity and equality, almost unprecedented for the time. It allowed men, women, and children to celebrate their unity in Christ and participate as led by the Spirit. Indeed, so unusual was the mixture of blacks and whites, that Bartleman enthusiastically exclaimed, “The color line was washed away in the blood.”5 He meant that in the sanctifying work of the Holy Spirit, the sin of racial prejudice had been removed by the cleansing blood of Jesus Christ.