As regular readers of this blog…..will no doubt know and be bored by, I purchased a 2006 Grand Vitara a couple of months back. I have not been slow in modifying it slightly, getting it ready for beach work, towing and driving country roads at night. Nothing too serious, just making it a little more useable. Every review listed the Grand Vitara well ahead of its other SUV rivals in the off-road stakes. Namely the Forester and RAV4. The Grand Vitara has a good chassis, High/ Low Range and even their own version of a diff locker. Not a true diff locker, but one that limits wheel spin when under load by distributing power to the opposing wheel. This puts it streets ahead of the Forester and RAV4.

The Achilles heal of this model is the clearance and suspension. With a move to a more road happy vehicle, Suzuki compromised on the clearance of this model. I, and others, have found the clearance off-road to be an issue. King Springs supply four uprated springs which provide 35-40 Mill of lift while using standard shocks. Perhaps just as helpful is their stiffness. I actually find it performs better on road as well, less body roll and feels more secure on the road. To say nothing of it no longer scraping the towbar on kerbs!

All snide comments can be inserted here! If you drive a Suzuki, you will need recovery gear. Some will say its to recover the ambitious driver in the Toyota, others will say so the Toyota can recover you! Either way a proper snatch point is needed. The tow recovery points on the front are only good for mild use, not the sort of pressure a snatch strap yields. I have purchased a good insert which goes into the Haymen Rheese tow point and it becomes a good recovery point at the rear. In order to get a proper one at the front, a bit of metal work would be needed. I also have a reasonable air compressor, snatch strap, shovel and cable ties. 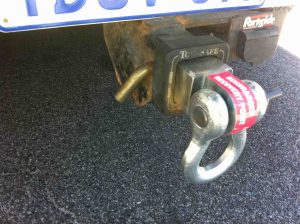 I like spotlights, always have. But I have never had a car as good as this one before, so the cheap $50 I found in the bargain bin at K-Mart were not going to suffice. I did some research and Narva Ultima 175 seemed to be a good compromise on my budget hampered aspirations. All my car mods come out of my pocket money I save up per week. Fortunately I found these on Ebay at $80 cheaper than the cheapest price at Auto-Shops. (I paid $169 Aus) The Suzukis have a weird wiring set-up where the high beams are positively wired. This means they always have power going to them, even when they are off. This makes traditional relay set-up redundant. Fortunately after some research on ‘Auszookers‘, a fantastic Suzuki owners forum, I found a good wiring diagram. The other problem I had was that with this modern car, getting a wire through the firewall to the switch was quite difficult. I had to almost dismantle the engine bay fuse box to get to the bonnet cable grommet. Here I could poke the needed wires through.

Repco supplied a better switch than the dud rocker switch Narva supply with their lights. I also had to buy another 7 metres of wiring as the wiring that came with the spotlights was woefully inadequate. I have configured the combination spotlights with the spread beam facing the roos bouncing from the side and the pencil beam to scare off the cats in the middle of the road.

I have a number of other things I wish to do to the car, but the one I am saving up for now is a UHF 80 channel radio

16 thoughts on “The Suzuki Grand Vitara Starts to Take Shape”